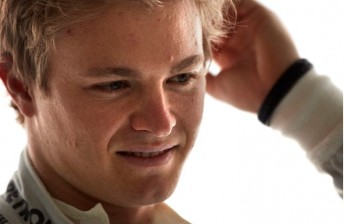 The German used his ‘double DRS’ equipped Mercedes to tremendous effect, putting down a 1:35.12s on his first flying lap of the Q3 session.

With the time a full 0.5s clear of next-best Lewis Hamilton, Rosberg chose not to complete a second run in order to save a set of soft tyres for tomorrow’s race.

Hamilton did make a second attempt but aborted it part-way through, and will start seventh thanks to a five-place grid penalty awarded due to a pre-event gearbox change.

The penalty leaves Michael Schumacher to join his team-mate on the front-row, with Kamui Kobayashi, Kimi Raikkonen, Jenson Button and Mark Webber rounding out the top six.

Sepang star Sergio Perez will share the fourth row with Hamilton, while Fernando Alonso and Romain Grosjean – who aborted his one and only Q3 attempt – complete the 10.

Sebastian Vettel will start 11th after failing to improve on his final lap in Q2. The result marks the first time since the 2009 Brazilian Grand Prix that the two-time and reigning World Champion has failed to make Q3.

Vettel has elected to use an earlier incarnation of Red Bull’s 2012 exhaust package this weekend, while team-mate Webber continues with the newer system.

Australian Daniel Ricciardo will line-up 17th, one place ahead of his Toro Rosso team-mate Jean-Eric Vergne, who could not progress from Q1 for the second race in succession.

All 24 drivers will start the Chinese Grand Prix, with both HRT entries once again making the 107% cut-off.