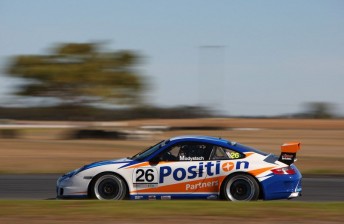 John Modystach has won the first race of the 2012 Porsche Staff Solutions International GT3 Cup Challenge Australia season as the second round of the Shannons Nationals presented by Hi-Tec Oils formally kicked off at Mallala today.

Modystach led all 40 laps of the evening contest, which doubled as the first of three Jim Richards Endurance Trophy races for the Porsche competitors this year.

Almold had run second in the early stages but couldn’t sustain the pace of his fellow front-runners.

A first corner collision at the rear of the field had earlier seen the Safety Car make an appearance on the opening lap.

In the opening Dial Before You Dig Australian Saloon Cars race of the weekend, it was reigning series winner Matthew Lovell who emerged victorious. The Ford driver held off a persistent Simon Tabinor to convert his earlier pole position into a race win. Behind the lead pair, South Australians Sam Milton and Josh Keane did their state proud to finish in third and fourth respectively.

Baily’s Aston Martin proved impressive on debut – the silver and red machine lapping 3.8s quicker than nearest rival Des Wall in the first session, before the Corvette driver narrowed the gap to 1.7s in the afternoon.

The series first 12 lap race for the Sports Sedans will start proceedings at Mallala Motorsport Park tomorrow at 9am while the series’ feature race – the Clem Smith Cup – begins at midday.