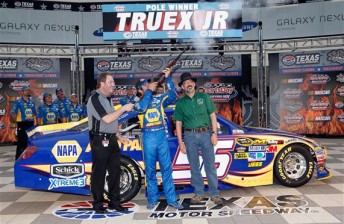 With the pole secure, Truex will try to win his first race since June 2007, when he claimed his only Cup victory at Dover.

“This team’s good enough. We can get to Victory Lane. We’re going to do it soon. I feel good about this team. I’m just having so much fun coming to the race track and driving these cars.

A very positive qualifying session for Australia’s Marcos Ambrose who qualified his Ford in seventh spot.

“That was one of our best efforts this season,” said Ambrose.

“This starting spot will make it easier on us tomorrow night. We want this Stanley Ford Fusion up there all night.”

The race will be run tomorrow morning Australian time with coverage on One HD and SPEED from 9am (Eastern Standard Time).