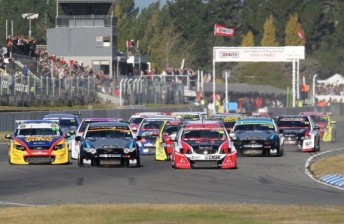 Experienced Australian engine builder Craig Hasted has been commissioned to assist New Zealand’s V8 SuperTourers Championship in finding a solution to the engine problems that have affected its inaugural season.

Scott McLaughlin and Andy Knight both encountered engine troubles at last weekend’s event in Ruapuna, with Knight’s car spectacularly exploding into flames during the second of the three races.

According to V8 SuperTourers co-owner Mark Petch, competitors have reported suffering from both overheating and oil surge during competition – with the latter issue having also been experienced by those running LS7-powered Moslers in the Australian GT Championship.

Queenslander Hasted has an extensive history with V8 race engines, and is currently the ‘control engine builder’ for the Auto One V8 Ute Racing Series.

While not currently involved with any V8 Supercars team, Cragsted has been working on the category’s ‘generic’ 5.0 litre engine, to be made available to new manufacturers wishing to enter the sport under the Car of the Future regulations.

“We believe we know what the issue is, but we want Craig to confirm our beliefs,” Petch told Speedcafe.com of Hasted’s appointment.

“Our cars are generating a lot of lateral and longitudinal g-forces, and the control of the oil in the sump is very important.

“We’ll make some decisions once Craig has been over here and confirmed our feelings.”

While insisting that the bonnet vents introduced at Ruapuna “worked fantastic”, Petch says that the overheating issue needs further attention.

“When the cars are tucked up under each other in traffic, the air through the radiator drops significantly because you’re in the disturbed air behind the car in front, so you’re not getting clean air,” he said. “The radiators aren’t able to clear it efficiently.”

The category hopes to make an announcement on any changes to its engine package next week ahead of the third round at Manfield later this month.