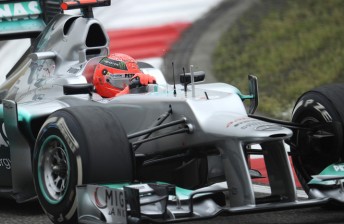 Following on from this morning’s damp practice session at the Formula 1 UBS Chinese Grand Prix, an intense session saw all drivers put in solid programs of running, with Michael Schumacher ending the session the fastest for Mercedes-AMG Petronas F1 Team with a 1:35.973.

This morning’s pace-setter, Lewis Hamilton was second quickest for Team Vodafone McLaren Mercedes a little over a tenth of a second behind the seven times World Champion. Pleasingly for the Red Bull pair they finished the session in third and fourth placing – Vettel edging Australian, Mark Webber.

The Mercedes powered front runners were getting their softer rubber up to speed very quickly, whilst it was taking the Red Bulls a number of laps to show speed.

Lotus F1 Team duo, Romain Grosjean and Kimi Raikkonen appear to be struggling in the cooler conditions – Raikkonen finishing the second session in 13th and Grosjean in 15th.

The woes for Felipe Massa continued – the Ferrari driver managing just 17th position from his 30 circulations.

Tomorrow, the final practice session will take place with qualifying later in the afternoon.

The Chinese Grand Prix will take place this weekend. See below for Speedcafe.com’s Shanghai Race Guide.