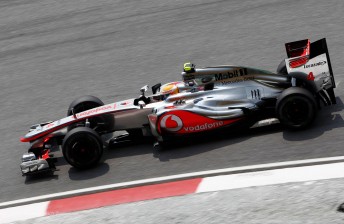 Lewis Hamilton has been handed a five-place grid penalty for the Chinese Grand Prix at Shanghai this weekend.

The penalty comes after the McLaren team has elected to changed his gearbox.

The 27-year-old, the only dual winner at the Shanghai circuit, says that the penalty will not change his approach to qualifying or the race.

“It doesn’t alter my approach. I still have to qualify as high as possible,” said Hamilton.

“I won from third last year so I’ll try to win from further back. I’ll have to try to start sixth if possible or somewhere close to that.”

Hamilton sits second in the drivers’ championship after finishing third in both races so far. He is just five points behind Ferrari’s world title leader Fernando Alonso.