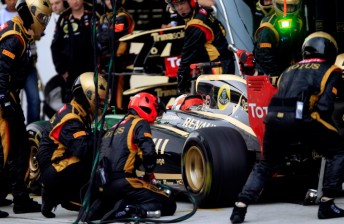 The Lotus F1 Team at work in Sepang

While it has been widely reported in recent days that Genii Capital – the private equity firm which wholly owns the Lotus F1 Team – has terminated Group Lotus’ title sponsorship of the Enstone-based Formula 1 operation, the car company says the agreement has merely been “reshaped”.

The move has come amidst great uncertainty for Group Lotus, with ownership of its parent company Proton have recently been transferred from the Malaysian government to private Malaysian automotive firm DRB-HICOM.

As well as denying rumours that DRB-HICOM is planning to put Proton into administration, Group Lotus has lashed out at those it feels are undermining its Formula 1 involvement, including Caterham F1 Team owner Tony Fernandes.

“Don’t take everything he (Fernandes) tweets too seriously – perhaps he’s still frustrated about owning Caterham instead of Lotus and the fact that he fights HRT and Marussia instead of Mercedes and Ferrari in F1,” read the Group Lotus statement in part.

The statement went on to claim that Group Lotus will continue to remain the title sponsor of the Lotus F1 Team until at least 2017.

“The new governance agreement signifies the continued commitment of Group Lotus to the team and the sport.

“Group Lotus’ branding and marketing rights and subsequent activities remain unaffected by the new agreement until at least 2017.

“In order to secure the loan Genii used 100 percent of the F1 team’s assets as collateral meaning that under the conditions of the loan agreement Proton have been given full title guarantee to all plant, machinery, show cars, computers, office and the Lotus F1 Team headquarters.

“In addition Proton retains the rights to purchase 10 percent of the F1 team. Another 10 percent share option will be activated if the team default on their loan obligations with Proton.”

The 2012 Formula 1 World Championship continues in China this weekend. See below for Speedcafe.com’s Shanghai Race Guide