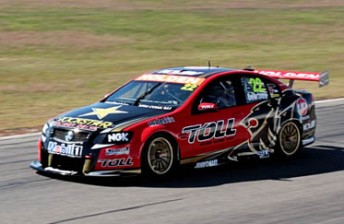 The 2010 V8 Supercars champion shook down his car at Winton Motor Raceway today, with the team reporting no issues from the car’s 20 lap session.

The new chassis, WR 015, is the 15th VE Commodore to come out of the team’s Clayton base and is expected to be the last V8 Supercar constructed under the current regulations.

With Courtney’s previous chassis the oldest in the Walkinshaw Racing fleet, Walkinshaw Racing’s operations manager Mike Henry said that Courtney was first in line for a new one, but downplayed its introduction by describing it as a “replaced component.”

“We had enough stock to build one more chassis, so we’ve put that together,” Henry told Speedcafe.com.

“Obviously, there was no point building a chassis and not using it. Just like any new race car, the chassis is just one component of a machine – it’s got the same engine, same gearbox, same diff, same seat – it’s just a new chassis.

“Effectively what we’ve done is replaced a component, it just so happens that it’s a big component!”

Courtney has endured a difficult start to the 2012 V8 Supercars Championship, currently running 21st in the championship.

Will a new car help Courtney’s cause? Henry says that hard work from all the team, not the new car, will give the former champ a strong chance at success.

“We are looking to win races and the facts are that at this point in the season, it hasn’t been a positive run for James,” Henry said.

“It’s head down bums up, getting on with the job, everybody pushing together and we’ll get James up there to win races, and that’s all there is to it.

“A lot of people talk about luck, and it is a factor, but more often than not, you make your own luck and its our responsibility as an organisation to give him the best possible platform for him to go out there and win races.

“James has our complete support and can’t wait to celebrate his next race win.”

The ITM400 Hamilton will be held next weekend.