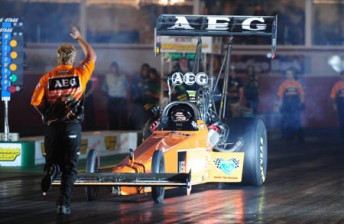 Darren Morgan is primed for a big weekend in Adelaide (PIC: Fred Dwyer)

Leading competitors in the ANDRA Pro Series Top Fuel Championship admit that there is a little more on the line than usual at this weekend’s historic return to Adelaide International Raceway, the fourth round of the 2011/2012 Championship, all saying it will be critical to their respective Championship chases.

This weekend will be the first time that professional drag racing in Australia has been held over anything less than the traditional quarter mile – with A.I.R. adopting a 1000 feet (approximately 300m) distance for safety reasons. The track hasn’t hosted a points scoring round of an ANDRA professional championship in over a decade, either.

West Aussie, Damien Harris enters the event in his Best Tractor Parts car for the first time as a Championship leader. He has also just returned from the USA where he competed as part of Santo Rapisarda’s American operation. This was vital in gaining experience over the shorter distance – the prescribed track length for the NHRA Full Throttle Drag Racing Series.

“We want to try and consolidate our position on the ladder,” said Harris “We’re all pretty keen and excited about leading the championship and really focused on making the most of this weekend coming. 1000 feet racing will be a first for everyone and it’s on a new track so we need to be focused.”

He leads Sydney-sider, Andrew Cowin by 14 points heading into the fourth round. The mercurial second generation Sydney-sider has been in good form this season and will be aiming for that to continue this weekend.

One man that enters the event with a head full of steam – perhaps even more than usual – is Mildura’s Darren Morgan. Morgan was the top qualifier last time out in Perth in the AEG Powertools machine and missed out on the event win by a narrow margin.

He set the fastest 1000 foot time in Australia at the Calder Park exhibition event back in February and says some of the problems they were encountering earlier in the season are now behind them. He sits just 34.5 points behind Harris in the Championship chase.

“I feel confident that we’re right on top of the little issues we had and can now start charging ahead,” said Morgan.

“This round is probably the most important for us all season so far. We’re only 34.5 points off the Championship lead, which isn’t much, but we’d like to be even closer come the end of the weekend. Being at a new track brings with it additional pressure – but everyone’s feeling that.”

Morgan further praised governing body – ANDRA – for its expansion into new territories such as Adelaide and being from Mildura is expecting plenty of home town support:

“Coming to Adelaide for the first time in a Top Fueller will be pretty special, we’re expecting plenty of support there from Mildura – but we’ve also got plenty of fans in Adelaide from events such as the Clipsal 500.

“We’re happy that we can be racing over the shorter distance. ANDRA have been making some solid inroads towards expanding and developing the sport in recent times – racing in Adelaide and officially taking our sport back to Melbourne are just two examples of this.”

Meantime, Phil Lamattina in the Fuchs Lubricants machine is looking to get his Pro Series back on track, sitting 69.5 points behind Harris.

Racing will be across Friday, Saturday and Sunday with Pro Series from 3:00pm both Friday and Saturday and 12:30pm Sunday. Top Fuel will be backed up by Top Alcohol, Top Bike and Pro Stock Motorcycle, as well as a full Sportsman card.