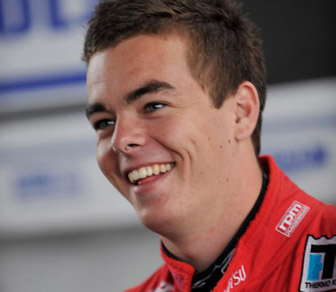 Scott McLaughlin is a rising star in the V8 Supercars world, even though he is now one of the most capped youngsters in the Dunlop Series field.

What other records can McLaughlin shatter in the sport?

Now in his third season of V8 racing, Speedcafe.com’s Grant Rowley spoke to McLaughlin about challenging for the Dunlop Series title this year, racing in the endurance races and competing in New Zealand’s V8 SuperTourers class. SCOTT McLAUGHLIN: It’s going good. We’re doing a lot of development stuff for my car. We’ve had a few upgrades since Clipsal and we’re just working on that.

We’re doing a few other things like bedding in brakes and stuff like that. It’s just a normal boring old test day!

SPEEDCAFE: You’re running second in the Dunlop Series after the first round. Solid start, but Chaz Mostert seemed to have everybody’s measure in Adelaide …

McLAUGHLIN: Absolutely. Those FPR cars are fast, and even in the Main Game, they were one-two, and Chaz was no different. Those cars were quick.

That’s why we’ve made some upgrades to the car and it is a lot better than what it was pre-Clipsal. I’m pretty confident going into Barbagallo that we can be on the top step.

SPEEDCAFE: So Chaz is beatable?

McLAUGHLIN: Of course, anyone is beatable. That’s my philosophy. A lot of people said that Andrew Thomspon couldn’t be beaten last year, but we beat him at Ipswich (McLaughlin’s first win in the Development Series).

We’ve just got to keep pressing on. I reckon if I keep finishing second all year, I’ll probably win the championship. That’s assuming that Chaz doesn’t win every race!

SPEEDCAFE: The Dunlop Series has certainly evolved over time, and more than ever now, you need to be aligned with a Main Series team. How important was your link with Stone Brothers Racing?

McLAUGHLIN: I was very lucky to be picked up by the Stone Brothers when I was 16. I’ve continued that relationship and I think it has worked well.

I think the Development Series is definitely tough for guys like the Russells (Novacastrian Motorsport) and a few other privateers out there to hang with the Main Game teams. Guys like Nick Percat (Walkinshaw Racing), Chaz Mostert (Ford Performance Racing), Scott Pye (Triple Eight) and myself have really good gear, obviously. It makes it hard for others, but I think with the technical changes that V8s have made by banning twin-shock absorbers, I think it makes it better for the category.

SPEEDCAFE: You’ve scored an endurance drive with Jonathon Webb (Tekno Autosport). What’s your expectation for those races at Sandown and Bathurst?

McLAUGHLIN: I just want to learn as much as I can and do the best job I can. I’ve just got to hand the car back to Webby in a good position and in good condition and let him finish off the job.

I think we’ll be pretty strong, looking at the pace that he has shown. When I had a drive of the car at Sandown, it was pretty awesome, so I’m looking forward to having another go in it in the next few months.

SPEEDCAFE: You say you want to learn as much as you can, but you’re certainly no V8 rookie (McLaughlin made his V8 debut in 2010). Do you see the endurances races being a major step up from the Dunlop Series?

McLAUGHLIN: I’ll just treat them as another race and do what the team has hired me to do. Like I said, just bring it back in good condition.

Obviously, the Main Game is a lot harder, more competitive, but we’ll see how it goes.

SPEEDCAFE: You’ve also been competing in New Zealand’s V8 SuperTourers. You had some engine problems in last Saturday’s race, but what do you think of it so far – from a series and personal point of view?

McLAUGHLIN: From a series point of view, I think it’s great. It has a lot of potential. After the second race, it already has a massive following. It’s going really well and is really good for New Zealand motorsport.

We’ve shown a lot of promise speedwise, but we’ve never really finished it off with a result. If we can just be a little more consisent, that will help. We had mechanical issues last week in Christchurch. If we can fix those, we’ll be fine.