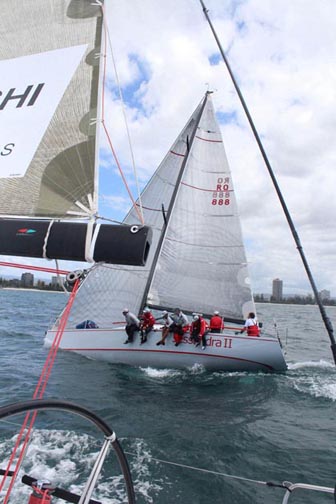 Roland Dane and his crew aboard Jezzandra II

Roland Dane is a competitive individual, and as it turns out, his passion for winning is not solely reserved for racing on land.

Dane, the owner of V8 Supercars’ most successful team in recent history, is a competitor – and a class winner – in sailing.

His crew also won the recent Sail Paradise regatta on the Gold Coast.

Dane plays down his yachting as a relaxing pastime.

“We won the IRC Division 2 of Brisbane Gladstone. It was very good competition, but it was pretty tight and we won.”

As one would assume, Dane doesn’t compete to make up the numbers. He has purchased a boat that is capable of victory and has a helmsman who has won the ‘Bathurst’ of the ocean. Michael Spies, a former Sydney to Hobart winner and motor racing enthusiast, is responsible for the maintenance of ‘Jezzandra II’ and is also the wheelsman (the steerer). While Dane’s regular job at race tracks and at his workshop is to lead his men, roles are reversed in sailing. Like V8 Supercars, Dane is the entrant in his sailing races, but that is as close as he gets to the top.

“On the boat, I’m one step up the rung from the ship’s cat!” he jokes.

“It’s very different to racing. I am there to do as I’m told, not interfere, where as every other day of the year, people are asking me what to do, asking for direction or having to be directed.

“When I get on the boat, nobody is asking me what to do, and that’s great, it’s the ultimate relaxation. When we do well at it, it’s tremendously satisfying.”

Dane’s next big task will be to guide his V8 Supercars team to victory at the ITM400 Hamilton in New Zealand, but it’s a different ‘Hamilton’ that Dane has some of his focus on.

In August, Queensland’s Hamilton Island will host the Audi Hamilton Island Race Week, and other than winning a bag full of V8 Supercars races, there’s not much more in life that Dane is looking forward to.

“The biggest thing for me is the Hamilton Island – it’s the best regatta in Australia. I’ve done it several times and I really enjoy it.

“The meeting clashes with Winton, but it’s not really a contest for me …”