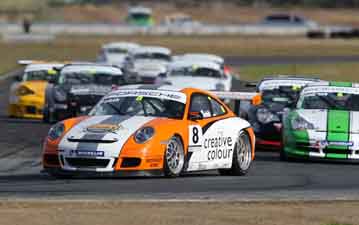 Porsche GT3 Cup Challenge Australia has secured a title sponsor for the 2012 season.

On the eve of the opening round of the championship at Mallala this weekend, Recruitment specialists Staff Solutions International has become the naming-rights supporter of the second-tier Porsche class.

The category will be known as the Porsche Staff Solutions International GT3 Cup Challenge Australia.

“Since its inception in 2008, GT3 Cup Challenge has created a niche in Australian motorsport as a competitive, professionally run and well supported Porsche series, and we recognised a great opportunity to be involved.”

Porsche Cars Australia motorsport manager Jamey Blaikie sees the announcement as great timing ahead of this weekend’s opening round at the South Australian circuit.

“In its short history, GT3 Cup Challenge has grown to become one of the healthiest motorsport categories in Australia, highlighted by the strong entries for the first 2012 round at Mallala,” said Blaikie.

This weekend’s opening round at Mallala marks the start of an exciting six-event schedule. The meeting is also the first of three Jim Richards Endurance Trophy races.