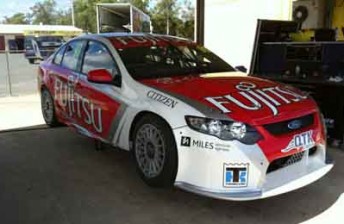 After competing at the first round in Adelaide in the same livery that he has used for the past two years, McLaughlin and sponsor Fujitsu have decided to give the #93 Falcon some new colours, adopting a white look on the front guards.

The 18-year-old Stone Brothers Racing driver is one of three Dunlop Series teams testing at Queensland Raceway today in preparation for the second round of the series at Perth next month.

Also testing at the ‘Paperclip’ is Triple Eight’s Monster Commodore of Scott Pye, along with Matt Stone Racing’s Ash Walsh and Daniel Jileson. 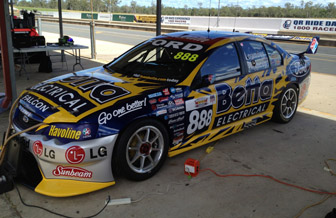 Reigning V8 Supercars champion Jamie Whincup is also at QR, preparing to test the team’s restored Betta Electrical Falcon BA – the car that Whincup and Craig Lowndes took to victory in the 2006 Bathurst 1000.

McLaughlin, currently second in the Dunlop Series, says he likes the new look of his SBR Falcon FG.

“We’ve been running the silver and black for the past couple of years, so we thought we’d do something different for 2012,” McLaughlin told Speedcafe.com.

“I reckon it looks pretty good.”

The second round of the Dunlop Series will be held at Perth’s Barbagallo Raceway on May 4-6.