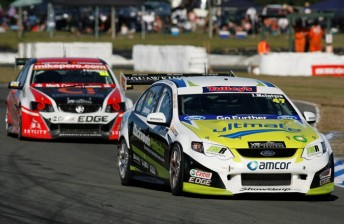 New Zealand V8SuperTourer driver John McIntyre has had his championship lead cut after a post-race inspection by officials on his Ford Falcon at Powerbuilt Tools Raceway near Christchurch.

McIntyre, who won the third and final race of the weekend, was allowed to keep his win, but was penalised 50 championship points after his team did not follow an instruction to make a modification to one of his car’s suspension components.

V8SuperTourers issued a technical bulletin prior to the meeting instructing all teams to shorten one of the suspension linkages by 4mm. This change had not been carried out by the John McIntyre Racing team and officials accepted that it had been oversight. Officials acknowledged that it was a minor offence and non performance enhancing, which was reflected in a points penalty and not an exclusion from the race results.

In terms of the championship, McIntyre’s lead over Jonny Reid now stands at just 19 points heading into the next round at Manfeild Autocourse Feilding on 27-29 April.