Sera and Luciani show the Kiwis how it’s done

Sera and Luciani show the Kiwis how it’s done 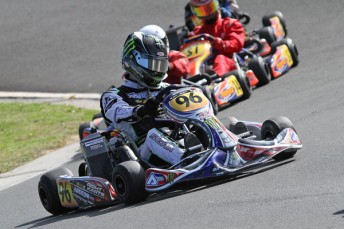 Dave Sera charged his way from 25th on the grid to take out the Rotax Light title (Pic: Fast Company/Graham Hughes)

What does two of Australia’s top kart racers do when they’ve won almost everything that there is to win in Australia karting?

The answer for Dave Sera and Remo Luciani is to head across the Tasman and show their Kiwi counterparts how it’s done – and that’s exactly what they did on at the New Zealand National Sprint Championships in Hamilton on the weekend.

Competing in the Rotax Light category, in which he is a six-time Australian champion, Sera’s victory was one of the finest of his illustrious career.

After being sidelined in the pre-final due to a mechanical issue, Sera started the final from 25th position with little chance of victory. However, one thing his competitors have come to know over time is that you can never discount Dave Sera.

Somehow, Sera managed to make up nine places under braking for the first turn, then four more out of the second, when a gaggle of drivers in front of him clashed.

“It’s probably not the most spectacular win that I’ve had, but it definitely had its moments. For a while there I felt like Moses parting the Red Sea (with drivers spinning off and opening gaps to make passing easy). If you played that race out again 100 times I don’t think it would go the same way it did that time,” said Sera.

Luciani, 51, claimed the 100cc Yamaha Heavy title on Saturday after a three-way battle with Zack Zaloum and one of the other Australian drivers in the field, Lane Moore from the Gold Coast.

Luciani, a seven-time Australian National champion and 55-time State champion, had to use all his guile and racecraft to beat his two younger opponents and afterwards was full of praise for the level of competition in New Zealand.

A total of six Australians competed at this year’s New Zealand event in Hamilton. Along with the wins by Sera and Luciani, both Lane Moore and James Sera finished second in the Rotax Heavy and Yamaha Light categories. Moore also finished third in the Yamaha Heavy category, one place ahead of Melbourne’s Mark Dorbolo.

Melbourne’s Ricky Capo mixed it with New Zealand’s top drivers near the front of the KZ2 category before crossing the line in seventh place.