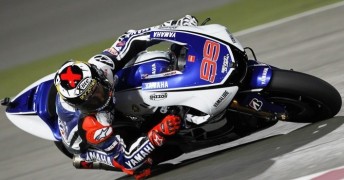 Jorge Lorenzo has won the opening round of the 2012 MotoGP championship, beating Dani Pedrosa and Casey Stoner at the Commercialbank Grand Prix of Qatar.

Lorenzo fell to second behind Stoner on just the fourth lap of the race, but tyre-life became critical with the Yamaha rider doing a better job of looking after his rubber.

Stoner appeared to have the race in the bag, but arm cramps had him struggle with the braking of his Honda. The final six laps saw him slip back into the clutches of Lorenzo with the Spaniard taking the lead with just over three laps remaining, before Pedrosa slipped through on the Australian a lap later.

“We were by far the fastest out there but after four laps I was started to get real arm pump, my arms were shaking off the bars and I was holding on with two fingers,” said Stoner.

“I couldn’t grip and I couldn’t use the brakes. Without that there was no problem to win, we’re really happy with the speed of the bike.

“I’ve got two weeks to go away and train and we can come back again.”

The result was Lorenzo’s first win at the Losail circuit in the Middle East and 32nd for his career.

“What an amazing race! I put everything I have, all my energy on the track, into this victory is because I never gave up, kept pushing and trying,” said Lorenzo.

“Casey was very strong at the beginning and opened a gap. Fortunately for us he struggled at the end and dropped his pace where I could keep mine so I managed to pass him.

“I am very grateful to Yamaha because they have made a big step this winter on the YZR-M1.”

Check out the Foxsports News wrap