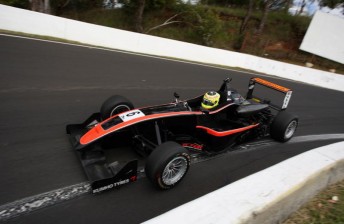 The Brit made it two wins from the three held over the weekend, with Jordan Skinner the victor in Race 1.

While some had race wins and championship positions on their mind, most of the motor racing nation were interested in just one thing – the Bathurst lap record.

The time, formally held by Allan Simonsen in a Ferrari 358, was beaten by reigning F3 champ Chris Gilmour in Race 2, moving the new ‘official’ benchmark Mount Panorama lap to 2m04.6187s.

But it was Winslow’s Sunday dominance that has helped him put a stamp on the 2012 crown. No one could beat Gilmour’s Race 2 lap time, but Winslow Bathurst’s success has given him eight of the nine wins so far this year. He now heads the standings by 42 points, nearly a full round clear of Gilmour.

“It’s been an amazing weekend overall and after some early hitches it all came together,” the Briton said.

“After the technical problem earlier in the weekend where we failed the ‘box’ test with the rear wing after contact from another car, we recovered brilliantly and were able to come through and win both races today.

“It’s one of the best tracks I’ve ever driven a Formula 3 car at. It is direct competition to Macau in terms of the kind of challenge it is. Coming down the mountain you need huge commitment over skyline in 5th gear, and it’s flat out.

“We broke the outright lap record here this weekend – I think I was a few thousandths off – so to win the event and be that close to the record, we’re really happy.”

Gilmour finished second in Race 3 and second overall and says he was thrilled to create some history this weekend.

“It’s pretty amazing to be here, full stop – but to do something like set the outright lap record that gets talked about so much is pretty special. It requires so much commitment and a great car to do the job here and we had that.

“In the end our car came on a bit too late to tackle James but we’re gaining momentum and looking good going into Darwin.”

Nick Foster took his Money Choice Team BRM Dallara to third after a race-long battle with Gilmour. The Porsche racer enjoyed his weekend with a trio of third-placed efforts in just his second F3 event.

Jordan Skinner was unable to back up his Race 1 success, falling victim to the Mount Panorama concrete after spinning out of Race 2, at turn one, at half-race distance.

In the feature race he and team-mate John Magro made contact coming into Murray’s corner at the end of the first lap, Magro spinning out of the race and Skinner continuing at the rear of the field after a visit to pit lane to fix some underlying damage.

The next round of the F3 Australian Drivers’ Championship will be held at Darwin’s Hidden Valley Raceway and will feature the second running of the City of Darwin Cup on June 15-17.