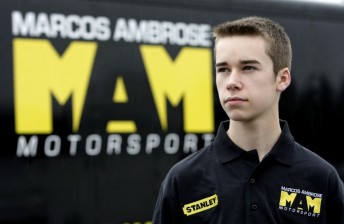 Ben Rhodes is set to step up to the big time, with his invitation to compete in the fifth annual Denny Hamlin Short Track Showdown for Late Model Stock Cars at Richmond International Raceway.

Early season form has seen the Marcos Ambrose Motorsport driver get his chance to compete in one of the flagship late model races of the season.

The event will be held on April 26 as a prelude to the NASCAR Sprint Cup Series race at the facility two days later, with the race seeing a combination of the best late model racers from across the USA, take on leading NASCAR stars.

This year’s race will be extended to 100 laps, with a total of 75 drivers invited to attend.

“This is a big chance for Ben to shine in front of a big crowd, on a big time race track, against some really tough competition,” said team principal Ambrose.

“Richmond is a great track; it’s a lot faster than the majority of the races that Marcos Ambrose Motorsport competes at, so it’s a step up for sure.

“Ben’s been doing a great job this year – I can’t wait to see how he goes.”

Proceeds of the event will benefit the Denny Hamlin Foundation, which supports organizations like the Children’s Hospital of Richmond, St. Jude’s Hospital and Victory Junction Camp.

Last year Marcos Ambrose Motorsport was represented in the race by driver George Miedecke, however his race was curtailed in the early running when he was crashed into by action sports star Travis Pastrana.