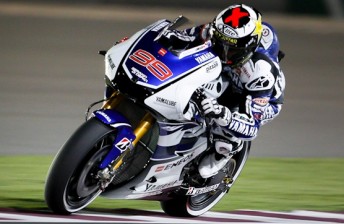 The battle between Honda and Yamaha, and in particular Casey Stoner and Jorge Lorenzo, has stepped-up during practice for the Commercialbank Qatar Grand Prix with the Spaniard topping Friday practice.

Lorenzo ended Stoner’s run at the top of the time sheets at Losail circuit, although it took a switch to softer race rubber to jump the Australian. The Honda rider also spoke of heavy traffic at the end of a hectic final session.

The reigning champion was fastest in the first two sessions and appeared on-track to do the same in the final session when a flurry of late fast times pushed him back to third.

“Today has been pretty good for us in general, we had some issues in the first two sessions but we’ve fixed them slightly in last one which is definitely positive,” said Stoner.

“We’ve been able to turn down the electronics a lot more and now I have more feeling and connection with the rear tyre which gave me a lot more confidence.

“This allowed me to do some good lap times with some pretty old tyres. A few people got in our way throughout the session so we were unable to show what we were really capable of, but we know how we feel and we’re confident for qualifying tomorrow.”

A tough evening for the second works Yamaha rider Ben Spies, who crashed early and was only 11th in the times, having completely few laps even after rejoining.

Dani Pedrosa was 0.812s off the pace in fifth on the second factory Honda.