Casey Stoner fast straight out of the box

Casey Stoner fast straight out of the box 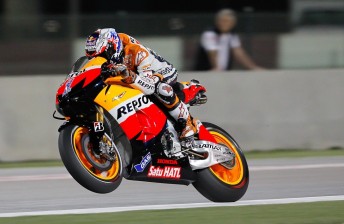 Casey Stoner fastest in the opening MotoGP session of the year

Reigning MotoGP World Champion Casey Stoner has set the fastest time of the first practice session at the Commercialbank Grand Prix of Qatar, the opening round of the 2012 championship.

Under the lights at Losail, the Repsol Honda rider set the benchmark time of 1:56.474 in the opening 45-minute session of the weekend aboard the new 1000cc machines.

The Australian did not have it all his own way, as the leading spot changed hands a few times in the closing minutes of the session, Jorge Lorenzo (Yamaha Factory Racing) being one rider who led before settling in second at just 0.174s off Stoner with a 1:56.648.

“The track tonight wasn’t so bad, I expected the conditions to be much worse but in general it was OK,” said Stoner.

“We started this evening with huge chatter issues and I was a little afraid we couldn’t fix this but after a few more exits we managed to reduce it to a more comfortable level.

“This is a positive point for the weekend but with such a short session and then nothing until tomorrow it’s slightly strange. It was an OK start tonight, we finished quickest which is good but we’ll have to wait until tomorrow for some real track time and with the conditions a little better and see where we are.”

Making it three different bikes in the top three Nicky Hayden rode his factory Ducati to a best time of 1:56.924, whilst Ben Spies on the second Yamaha Factory Racing machine was fourth and the final rider under 1:57”.

Dani Pedrosa (Respol Honda) was just under seven-tenths of a second off his team-mate Stoner as the Spaniard ended the session fifth, and Cal Crutchlow put in an impressive showing on his Monster Yamaha Tech 3 machine to secure the highest satellite position of sixth in a time of 1:57.395. The Brit was also the final rider to get inside a second off Stoner’s benchmark.

The MotoGP bikes return to the track on later tonight for their second and third practice sessions.