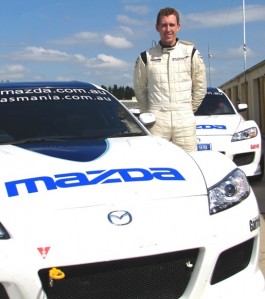 Brendan Reeves is ready for the Mazda attack at Targa Tasmania

After finishing second in the World Rally Championship Academy segment of last weekend’s Vodafone Rally de Portugal in a Ford Fiesta R2, Reeves headed straight to Wakefield Park outside Goulburn in NSW to join the Mazda factory squad for a full day’s testing of the RX-8 SP.

Reeves and co-driving sister Rhianon Smyth will spearhead a three-car entry from Mazda, that also includes multiple Australian Rally Champions Simon and Sue Evans in a Mazda3 MPS, plus another RX-8 SP for a yet to be announced crew.

Reeves used the test at Wakefield Park to get his head back around the turbo-charged RX-8 SP, plus work on some changes to the car’s set-up ahead of the Targa event that will run from 17-22 April around Tasmania.

“We have a very good package for Targa Tasmania and Mazda is very keen to win the event outright,” said Reeves.

“This is my eighth outing with Mazda and it would be great to reward them with a victory in what is the biggest event of its type in Australia.

“The Mazda RX-8 SP is a powerful rear-wheel-drive machine compared to the front-wheel-drive Fiesta we finished second with on the WRC Academy at the Rally of Portugal.

“Not only have I had to adjust my driving style, I am back on the right side of the car and have come from gravel to tarmac rallying. So having a day at Wakefield Park was really important.

“I drove the car at the start of the year at Targa Wrestpoint and that event was more about learning the vehicle. At the Wakefield test I was able to provide some more detailed input into some changes and overall the day was very positive.

“Targa Tasmania has strict rules on tyres and this year we will have eight tyres at our disposal over a full week’s worth of competition. So it’s important to be comfortable in the car, but make sure it’s quick without torturing the rubber over the 620 competitive kilometres.

“The WRC has really helped in terms of our preparation for long stages. You have to be fit to be successful at Targa. With Mount Arrowsmith being the longest stage of the event, and it being on the final day, you can understand why Targa will not be decided until the very end.”

Reeves and Smyth head to Tasmania next week for a full week’s reconnaissance of the 620km course.