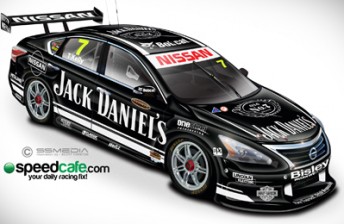 Nissan will enter the 2013 V8 Supercars Championship with its all-new Altima – and Speedcafe.com is giving you the first look into the future.

In conjunction with graphic artist Scott Yorston, Speedcafe.com has produced this artist’s impression of what Nissan Motorsport’s return to top level Australian motorsport may look like.

The team is expected to continue with title sponsorship from Jack Daniel’s on two of its four cars, with Nissan likely to occupy space on the windscreen and rear quarter panels.

Nissan is the only manufacturer confirmed to join the V8 Supercars Championship next year, joining traditional rivals Ford and Holden under the new ‘Car of the Future’ regulations.

The road-going version of the Altima was launched at the New York Motor Show yesterday, with the car set to hit Australia’s streets in the second half of 2013.

But before the road car is here, Nissan will have the Altima on the V8 Supercars race track.

CLICK HERE for Speedcafe.com’s first images of the road-going Altima.

CLICK HERE to download your wallpaper pack, including artwork suitable for your PC’s wallpaper, iPhone and tablet.