Coulthard relaxed ahead of SuperTourers debut

Coulthard relaxed ahead of SuperTourers debut 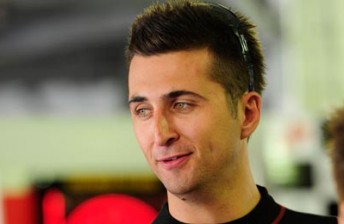 Fabian Coulthard is taking a relaxed approach to his V8 SuperTourers debut at Christchurch’s Ruapuna Raceway this weekend.

Coulthard will replace countryman Greg Murphy in his #51 M3 Racing Commodore at this weekend’s second round of the New Zealand-based championship after Murphy was ruled out due to a back injury.

Coulthard, who drives the #14 Lockwood Racing Commodore in the V8 Supercars Championship, says that is not placing any expectations on results in Christchurch, and is looking to ease himself into the new machine.

“It’s a tall order. I’ll have very minimal practice, but the one thing on my side is that I’ve raced at Ruapuna a couple of times,” Coulthard told Speedcafe.com.

“I’ve won in Porsches there and Formula Fords. I know the track relatively well. I’ve just got to learn the new car.

“I’ll be working with Paul Forgie (engineer), who I’ve done a few races with over the years in V8 Supercars.

“Half of the equation this weekend will be OK, but I just have to learn the car. Murph jumped in it, went well and won two races (at Hampton Downs). The car is obviously capable, the team can do it, I just have to apply myself.

“The key for me is to get as many laps as I can in the practice sessions.”

Murphy will be fit for the third round of the championship at Manfeild, but this will not be Coulthard’s last drive in the car. Coulthard has been selected as Murphy’s endurance race partner, as the final three rounds of the inaugural championship are two-driver events.

Coulthard says that he feels fortunate to team up with Murphy.

“This is great practice for the endurance races. Anytime in a car that you’ve never driven before is invaluable. It’s fortunate that this has come about and we’ll make the most of the opportunity,” Coulthard said.

“I’m looking forward to doing the enduros later in the year. Murph is a formidable driver, he is well credentialed and he proved that in the first round where he jumped in the car and took the round win straight away.

“I couldn’t think of teaming up with anyone who is better.”

The V8 SuperTourers hit the track for practice at Ruapuna today.