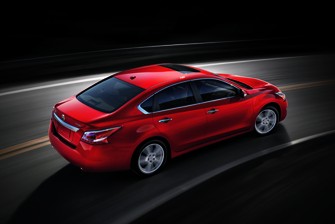 Nissan revealed the all-new Altima in New York this morning (Australian time). The car will be imported into Australia in the second half of 2013. It will also be the basis for Nissan’s V8 Supercars competition program.

CLICK HERE for Speedcafe.com’s initial story and images of the new Altima.

Kelly, who will be a factory Nissan Motorsport driver next year, is in New York for the car’s worldwide launch.

“It’s hugely exciting to be here in New York for the unveiling of the new Nissan Altima,” said Kelly. “Confirming Altima as the model we will race from 2013 is the next step for us as we gear up for next season.

“The Altima looks fantastic in the flesh. Now we can’t wait to get our first Nissan Altima V8 Supercar on-track for testing later this year because it’s going to look sensational as a race car.”

Here is the Seven News report from the unveiling