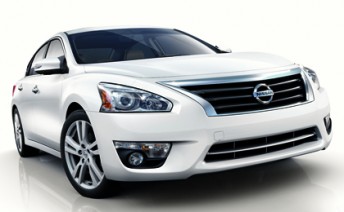 Nissan has unveiled its all-new Altima – the car set to be the basis of the Japanese giants’ assault on the V8 Supercars Championship next year.

The revealing of the new car at the New York Motor Show this morning (Australian time) coincides with confirmation that Nissan Australia will enter the medium car segment with the Altima. The car will replace the Maxima and will arrive in Australian showrooms in the second half of 2013.

The Altima was unveiled in New York by Nissan Motor Company CEO Carlos Ghosn. He was joined at the motor show by Kelly Racing’s co-owner and driver Rick Kelly, as well as the team’s CEO John Crennan.

The new Nissan Altima will make for a sleeker race car, compared to its Ford Falcon and Holden Commodore rivals

The new Altima is the fifth generation of the model, but it will be the first time it has been sold in Australia.

Nissan Australia CEO Bill Peffer hopes the car’s entry into the V8 Supercars Championship will increase awareness ahead of its on-sale date.

“The new Altima is already the second most successful passenger sedan in the USA with sales of more than 20,000 per month,” said Nissan Australia CEO Bill Peffer.

“Its appearance in Australia will be a strategic boost to our ever improving passenger car line up and will offer a compelling alternative to the familiar products in this segment.

“Altima will also raise the bar in motorsport as Nissan’s entry in the 2013 V8 Supercar Championship where it will introduce modern generation sedan styling and technology.”

Compared to V8 Supercars’ current entrants – the Ford Falcon and the Holden Commodore – the Altima’s smaller size and sleeker shape will give the category’s technical department a major task in ensuring the aerodynamic performance of the three cars are equal. To achieve this, V8 Supercars could take the cars off-shore for a wind tunnel aerodynamics testing program.