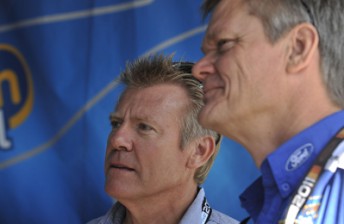 Racing Entitlements Contract owner Charlie Schwerkolt is closing in on his future plans in the V8 Supercars Championship.

Schwerkolt owns the REC that is leased to Dick Johnson Racing for James Moffat’s #18 Team Norton entry, having obtained the REC after the pair parted ways unceremoniously at the end of the 2010 season.

The likeable forklift business owner is now in the second year of the lease, and according to REC rules, can not lease his REC any longer.

Next year, Schwerkolt will be forced to enter his own ‘CS Racing’ team or, sell his stake in the sport.

Schwerkolt has ruled out selling, and is certain to move his REC away from DJR.

Speedcafe.com understands that Schwerkolt is keen on shifting his REC to another team to run his car in a similar deal to that the Rod Nash Racing entry enjoys with its alignment with Ford Performance Racing.

Schwerkolt says that he has a number of options – including a possible fourth entry at FPR – and is keen to have the deal wrapped up before May.

“I’ve looked at all the options, and obviously there’s plenty of good options there,” Schwerkolt told Speedcafe.com.

“We’ve certainly spoken (to FPR), but I’ve been speaking to a lot of people. I’ve locked nothing in just as yet, but it certainly is getting closer.

“I would like to have something locked away by May. I have to order a car for the new regulations, so I have to more on. Time is of the essence.”

CLICK HERE for more with Schwerkolt in this week’s edition of Cafe Chat.

On another note, it is unclear yet if DJR will be able to retain the #18, a number that is now (according to the regulations) owned by Schwerkolt.