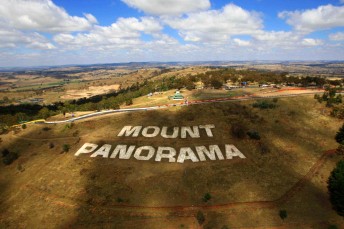 Look for Mount Panorama’s lap record to be shattered tomorrow, with the Australian Formula 3 class set to make its debut around the famous Bathurst circuit this weekend.

As part of the annual Bathurst Motor Festival, Formula 3 will hold two sessions tomorrow – practice in the morning and qualifying in the afternoon. With clear conditions forecasted for the two sessions (see graphic below right), all existing records are expected to fall.

The current lap record is held by Allan Simonsen, who set his time during this year’s Armor All Bathurst 12 Hour in his Ferrari 458 GT3. The time is listed as a 2m06.3311.

Smonsen’s lap was set during the race, and that time will remain the benchmark, unless an F3 car can beat it this weekend during one of their three races. Wet conditions in the Bathurst region have predicted for Saturday and Sunday. The weather forecast for Bathurst tomorrow (Courtesy of weatherzone.com.au)

The practice/qualifying lap record stands at 2m06.8012s, set by Craig Lowndes in his TeamVodafone Commodore during Friday practice for the 2010 Supercheap Auto Bathurst 1000.

If fine conditions prevail, an F3 car is expected to lap either just inside or above the 2 minute mark.

The feat will return open wheel cars to the top of Bathurst’s fastest lap time – a feat not held since Niel Allen’s long-standing 2m09.7s, set in a McLaren M10B-Chevrolet in 1970 (on the pre-Chase circuit). Allen’s ‘race’ lap time record stood until 2002, beaten by John Bowe (Falcon BA) during the Bathurst 1000.

The unofficial Bathurst lap record, unlikely to be beaten for some time, was set by Jenson Button in a McLaren Mercedes Formula 1 test car during a Vodafone press event in 2010. That time was unofficially recorded at 1m48s.

British driver James Winslow will be hoping to continue his winning ways in F3, having won all six races of the title so far this season. John Magro, who showed promising speed at Symmons Plains last weekend, will also be one of the race favourites, along with reigning F3 champion Chris Gilmour.

One driver who is making a one-off return to F3 is Nick Foster. The young Carrera Cup hard-charger is using the meeting to get accustomed with the circuit ahead of the Carrera Cup event at the track in October.

Foster will compete with backing from Money Choice, with the car being prepared by Team BRM. 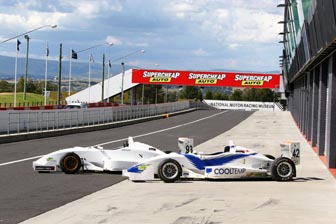 Foster has raced in F3 on one occasion two years ago, and says that this weekend’s event will be a completely new challenge.

“It will be different, that’s for sure, Foster told Speedcafe.com.

“It will be different to anything I’ve done before. I’m not there to win it. We’re there to learn the track for when I’m there in Carrera Cup later this year.

“An F3 car and a Carrera Cup car are obviously worlds apart, but miles around Bathurst there are good miles. You don’t get to race there very often, so I’ll just be looking to get the most out of it.

“No one has been around there in these cars before. It will be different, but mainly for myself, we’ll just work through it and see how it goes. I’m definitely not really there to break the lap record.”