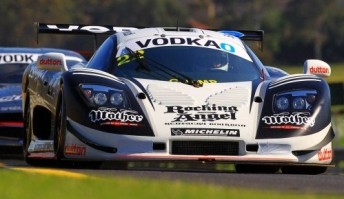 Dean Grant will return to the Australian GT Championship in Round 2 at Phillip Island on May 25-27.

A stalwart of the Australian sportscar racing scene, Grant will team up with Ash Samadi in his Team ASR Mosler MT900 GT3 after Samadi has decided to rest his Lamborghini Gallardo GT3 that he campaigned at the opening round of the championship in Adelaide.

With this invaluable experience available, Samadi quickly signed Grant, and with Australian GT set to hold two 60 minute mini-enduros, Grant is confident the pair will be competitive at the Island circuit.

“I’m really looking forward to getting back behind the wheel of a Mosler again” said Grant.

“I took my first ever GT pole in one in 2010 and know how good they are. Unfortunately I missed the first round of this year’s championship so to return for Round 2 at my home circuit of Phillip Island is great.

“The Mosler loves smooth, fast flowing circuits so we’ll definitely be quick there”.

The Samadi/Grant Mosler will be supported by Mother Energy Drinks.

Samadi recently tested the Mosler at Eastern Creek and is confident the entry will be a force to be reckoned with.

“We tested the newly upgraded car at Eastern Creek last week and we are very happy with it” he said.

“Phillip Island is a beautiful circuit, perfectly suited to the strengths of the Mother Energy Drinks Mosler and with the 2012 upgrades, the team should be able to enjoy some good results”.

Round 2 of the Australian GT Championship protected by Sargent Security is at Phillip Island on May 25-27, the first of four rounds to be contested as part of the Shannons Nationals Motor Racing Championships.