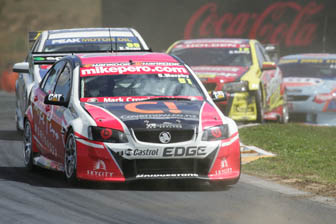 Murphy currently leads the V8 SuperTourers championship after Round 1

V8 SuperTourer series leader Greg Murphy will leave his decision to compete in this weekend’s second round at the Powerbuilt Tools Raceway until the latest minute.

Murphy is recovering from an operation on his back to repair a ruptured disc. The operation forced him to miss last weekend’s V8 Supercars race at Symmons Plains.

The Kiwi star will wait until Thursday to make his final decision to compete over this Easter long weekend at the Ruapuna circuit.

The four-time Bathurst winner has told V8 SuperTourers officials that he plans to be at the Christchurch venue whether he is racing or not.

V8 SuperTourers CEO Paul Radisich says that the category has his fingers crossed to get Murphy back in the category as soon as possible.

“Greg is the championship leader and a crowd favourite so everyone is holding out as long as they possibly can for him. It’s his call,” Radisich said.

“Having said that, if it is not possible for him to race we do know there are a couple of big name drivers out there very keen indeed to step in for a one-off appearance.”

Murphy has previously said that he will be fit and ready for his home V8 Supercars event at Hamilton in three weeks time.