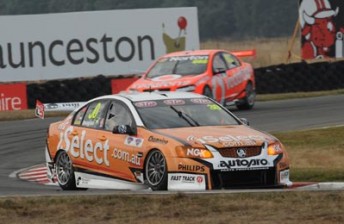 V8 Supercars team owner Lucas Dumbrell is weighing up his endurance driver options for Sandown and Bathurst this year.

Dumbrell, owner of the iSelect-backed Commodore driven by Taz Douglas, is looking at all available drivers, from rookies to experienced steerers.

One driver who has emerged as a likely candidate is Scott Pye, who recently made his V8 Supercars debut in the Dunlop Series at the Clipsal 500, driving Triple Eight Race Engineering’s Monster Energy Commodore.

Dumbrell says that Pye, who is just one race into his V8 Supercars career, is on his wish list, but will also consider other experienced drivers.

“I want to get it sorted as soon as possible, but I don’t want to rush into something,” Dumbrell told Speedcafe.com.

“A few guys at Clipsal in the Development Series showed that they drive quite well. The one who stands out, who is a true DVS rookie, was Scott Pye. He did a good job and stayed out of trouble. To be able to do that at Clipsal is an achievement in itself.

“He had no experience in a V8 Supercar, but I thought he did an excellent job. We’ll have a look and see how he goes at Perth, but I’m in no rush to make a decision. There are other experienced drivers out there who could also do a good job.”

With Lucas Dumbrell Motorsport enjoying technical support from Triple Eight in 2012, Dumbrell admits that Pye would be a good fit in his team.

“We just want the best guy for the job,” Dumbrell said.

“If I’m to get a young guy with not much experience, I’d rather the experience that he has be in a similar sort of car to what we have. That’s where Scott fits the bill perfectly, but again, we’ll wait and see. There’s so many guys around that can do the job. There’s some local guys, some up and comers in the Development Series and even a few blokes from overseas.”