Will Power’s first win of 2012 in Alabama

Will Power’s first win of 2012 in Alabama 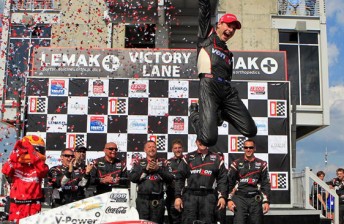 Will Power won the Indy Grand Prix of Alabama

Australian IndyCar star Will Power has come from ninth on the grid to take out the Honda Indy Grand Prix of Alabama holding off Kiwi Scott Dixon to take the win.

Power inherited the lead from Penske team-mate, Helio Castroneves when he pitted his Chevrolet on lap 68 of 90 and then survived a restart on lap 74 to take the 16th win of his career – equalling the IZOD IndyCar Series wins by the late Dan Wheldon. It takes Chevrolet to an undefeated streak since re-entering the Series this year.

“(Race strategist) Tim Cindric kept putting me in such a good position so we could use our speed,” said Power. “That last restart was kind of hairy. I knew Scott was going to be really quick and hounded me for a couple laps there.

“Just with good stops and good strategy calls put me out in clean air so we could use our speed.  We slowly passed one by one.  It was a very good team effort.  The strategy was perfect.  The stops were perfect.”

Dixon has finished second in all three of the events conducted at Barber Motorsports Park and is off to his best start in the IndyCar Series since his 2008 Championship year.

“We got caught up there in some traffic in the pit; the pit sequence kind of got us there,” said Dixon. “I think we had the car to beat.  We had the speed and for the most part the right strategy, but just wasn’t our day today.

“All in all, Team Target did a fantastic job with Honda. I think we’re starting to get on something with this car, so hopefully in the next few races we might be looking at the top spot on the podium.”

Helio Castroneves ended the race in third placing – just holding out Graham Rahal. Both Sebastian Bourdais and Formula 1 convert, Rubens Barrichello finished within the top 10, Bourdais delivering the Lotus powerplant its first top 10 in the Series.

Castroneves now leads the Championship by two points from Dixon with Power a further seven points behind.