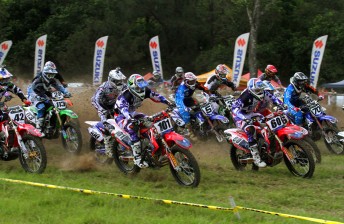 New Zealand’s former World MX Champion Ben Townley dominated the opening round of the Monster Energy MX Nationals at Conondale on the Sunshine Coast winning every Moto of the day for Carlton Dry Honda Thor Racing.

Townley showed exactly why he has been chosen to replace the injured Chad Reed in the AMA Motocross Series for TwoTwo Motorsports, making a successful debut in Australian MX Nationals racing, ironically it could be the final time that he’s seen in Australia given American commitments.

Coppins – another Kiwi – went on to finish the final moto and the round in second place behind Townley. It was heartbreak for Anderson who suffered a mechanical problem in the final, longer 30 minute affair.

The much anticipated debut of Jay Marmont on the Castrol-backed Monster Energy Kawasaki was thwarted by injury. He battled through and managed just seventh overall for the round. However, being a four times Champion of the Series, he can never be discounted.

In the MX2 category, Sunshine Coast local competitor – Ford Dale – could be considered unlucky. He won the first two motos and then crashed in the final event, crossing the line in ninth. This paved the way for Serco Yamaha’s Kirk Gibbs to take the round win over Dale and Gibbs’ team-mate Luke Styke.

Choice Motorsports’ Dylan Long won the Pirelli Under-19s development category – tasting victory in the first and third motos. The KTM rider finished ahead of another of the orange bikes in Kayne Lamont – who won the second moto – and GYTR Yamaha’s Sam Martin.

The next round of the Monster Energy MX Nationals will be conducted over two days in Coonabarabran in New South Wales across the weekend of April 14-15.