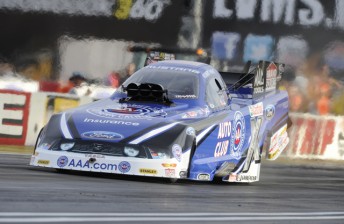 Hight had a relatively easy passage to the finals, overcoming Terry Haddock, Gary Densham and Bob Bode. Meantime, Tasca III had his work cut out – being forced to eliminate tough competition in Jeff Arend, Matt Hagan and Cruz Pedregon.

The win by Hight was the highlight of a sorry day for the Castrol GTX-backed John Force Racing team with Force, daughter Courtney and Mike Neff all being eliminated in the opening round of competition.

Hight will take the points lead in the Full Throttle Funny Car Series after the weekend’s solid results.

Spencer Massey’s performances in Top Fuel this season have been sensational and he continued that by defeating Antron Brown in the Las Vegas final with a 3.830 lap to Brown’s 3.849.

Brown had to account for Tony Schumacher and Morgan Lucas on his way to the final.

Three Australian linked entries were involved across the weekend, with Dave Grubnic being the only one to make the 16 car field. Grubnic knocked out Clay Millican in the opening round and then met his fate with Steve Torrence in the second.

The two-car Rapisarda Racing assault didn’t make it through Saturday. Aussie Damien Harris had a troubled run – he did a time quick enough to put him on the bump spot during the final qualifying run, however broke an engine at the top of the lane and covered the track with oil. Under NHRA rules, they disallow the time and apply a points penalty, thus putting Harris out of action. 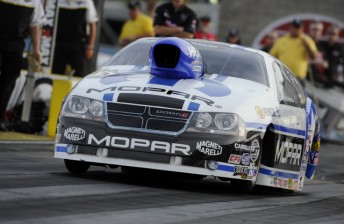 The other Rapisarda Racing car of Cory McClenathan was the only other machine not to qualify.

The veteran racer knocked out Greg Anderson in round number two – after Anderson walked away with both the low ET and fastest speed points. He then defeated lady racer, Erica Enders to make it into the final.

Nobile got around heavy hitters Jeg Coughlin in round one,  Jason Line and Greg Stanfield in his charge to the Final.