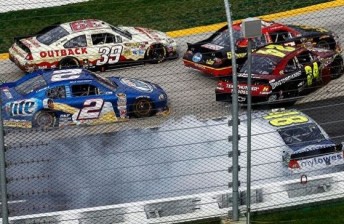 Ryan Newman has benefitted from a Hendrick Motorsports double-disaster to win the Goody’s Fast Relief 500 Sunday at Martinsville Speedway.

Hendrick pair Jeff Gordon and Jimmie Johnson had dominated the event, but elected not to pit for new tyres when a caution flew on Lap 497 – sending the race into a ‘green-white-chequer’ overtime.

Michael Waltrip Racing Toyota driver Clint Bowyer dived to the inside of the two Chevrolets at the restart – spinning all three cars out of contention.

Newman managed to escape the carnage and went on to claim the victory from AJ Allmendinger, Dale Earnhardt Jr, Matt Kenseth and Martin Truex.

The Richard Petty Motorsport driver gained several positions amid the late chaos, but believed he should have been higher still had it not been for ill-timed pitstops.

“It was a strange day, we had speed but were caught out with the pit stops,” Ambrose said.

“We stayed with it, and managed to keep clear of trouble at the finish to pick up some points.

“We have a week off to think about Texas, and I’m sure we can get the season really going there.”

Greg Biffle continues to lead the points standings heading into the one-week break prior to the Samsung Mobile 500 at Texas Motor Speedway.