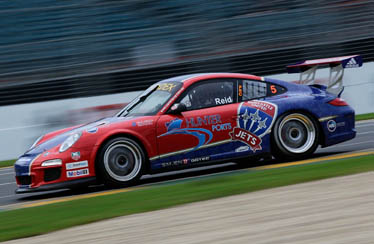 After finishing second in last year’s title but missing the opening round at the Adelaide street track, Reid was scouted to substitute Nathan Tinkler in the #5 Porsche for the season’s second event at Albert Park.

Reid impressed in Melbourne, qualifying on pole and claiming three second place finishes, trailing reigning champion Craig Baird in all three races. Despite missing the Clipsal 500 event, he sits sixth in the title.

After his strong performance at Albert Park, Reid was pleased to have scored the seat for the remainder of the 2012 season.

“This is a huge opportunity for me and I’m very grateful,” Reid said.

“It was a massive boost for me after a tough start to the year and now I’m ready to get out there and win some races.”

“We had a great weekend at Albert Park, particularly with posting pole position. It was a great way to start the event, especially being with a new team.”

Tinkler says that Reid was the obviously replacement for the rest of the 2012 Carrera Cup season.

“Jonny is obviously a great talent and it would be a shame to see him absent from the category any longer,” said Tinkler.

“Jonny’s performance at Albert Park showed that he is a class act in a Porsche and is capable of winning Carrera Cup races.

“I was unsure as to which races I could attend this year, so it made perfect sense to give Jonny the chance to continue his successful run in the championship.”

The next round of the Porsche City Index Carrera Cup Australia will be held at Perth’s Barbagallo Raceway on May 4-6.