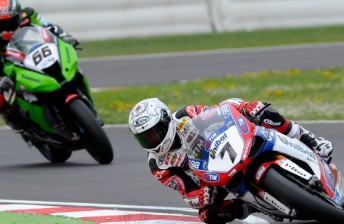 Carlos Checa out front at Imola

Defending World Superbike Champion Carlos Checa has swept both races at Imola as he jumped to lead in the standings.

In the opening race Checa (Althea Racing Ducati) waited until half race distance to put a move on early leader Tom Sykes (Kawasaki Racing Team) but when he did he rode at lap record pace and took his second win of the year in some style. Sykes had his best every dry race performance on the Kawasaki in second place, with Leon Haslam (BMW Motorrad Motorsport) and Max Biaggi (Aprilia Racing) disputing the final podium place. It went to Haslam, by a second from his Italian rival.

Checa was unstoppable in the second, once again beating Sykes and the hard charging Haslam. Sykes set a new lap record of 1 minute 47.552 seconds to try and escape Checa.

Just like the opening race Biaggi was fourth, fifth this time around was Jonathan Rea (Honda World Superbike Team) who did well to survive a trip across the gravel after tangling with sixth placed Laverty. Jakub Smrz (Liberty Racing Team Effenbert) was a very close seventh. Leon Camier (Crescent Fixi Suzuki) rode to eighth place.