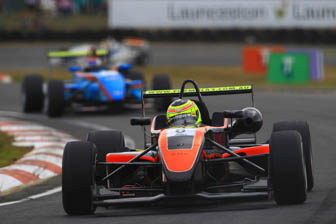 James Winslow has completed the most dominant start to a Formula 3 Australian Drivers Championship season ever after taking out Round 2 at Symmons Plains, Tasmania today.

Victory in today’s two races has now given the R-Tek Motorsport driver six races in a row – unbeaten in 2012 – and takes a strong 91-58 points lead over last years’ champion Chris Gilmour going into the third round next weekend, at Mount Panorama in Bathurst.

After being forced to fight his way to the front in Race 2, Winslow executed a near perfect drive in the Symmons Plains feature race – leading from start to finish.

To add icing to his cake, Winslow also re-set the existing and six-year old Symmons Plains Formula 3 lap record in Race 2 this morning, setting the new benchmark at 50.5036s.

Gilmour was second and John Magro passed more cars than anyone across the weekend to end the day third, after failing to finish yesterday’s opener in controversial circumstances.

Winslow is no guarantee to compete in all of the round of this year’s championship, but says he is enjoying being on top.

“It’s just been a sensational weekend. The car has been just about perfect and very fast when we needed it to be,” Winslow said.

“I never expected to be able to win six races in a row but it’s a testament to every component of this team doing its job well and putting together a great program. It’s nice to know you’re jumping in a really good car and able to go and do the job.”

Gilmour remained confident that he was more than capable of going on with a lasting challenge to Winslow’s early-season supremacy.

“I’m really pleased with this and it shows that we have the pace to go with James and compete for a championship again,” he said.

“He’s going to be hard to beat but the car is fantastic and I think we still have a lot to give in the remainder of the year. He’s not going to be easy to beat but I love a challenge and can’t wait for the next race.”

The ever-laconic Magro said he was another ready to step up to offer a challenge to the runaway series leader, having shown prodigious pace across this weekends’ event.

Magro set the fastest lap in Race 3 and after storming from last to second in race two, moved from sixth to third in the feature event to affirm his ability to overtake.

In the Forpark Australia National class, the battle stepped up a notch, with Hayden Cooper and Adrian Cottrell coming together in the second sprint race while battling for the class win on the final lap.

Cottrell had enough for Cooper in the finale’, just edging out his young rival after a race-long battle to score his first big trophy and class win of his brief F3 career.

The next round of the Formula 3 Australian Drivers Championship will be held at the iconic Mount Panorama circuit in Bathurst, as part of the Bathurst Motor Festival this Easter long weekend.