The three-time and reigning champion secured his eighth race win at the circuit despite a spin during the first stint.

Pole-sitter Craig Lowndes led the early stages of the race before losing out to fellow front-row starter Davison as the field changed from hard to soft tyres in the first round of stops.

Lowndes then crashed out of the race in the second stint – the left-front suspension was ripped off the TeamVodafone Commodore when Lowndes looked to the outside of the Tradingpost Falcon into the Turn 4 hairpin. 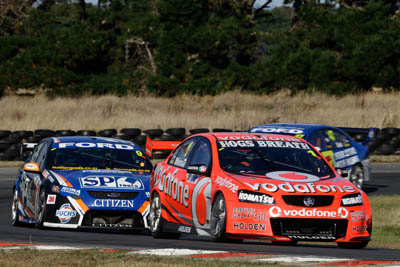 Davison struggled for pace during the remainder of the race, losing places to team-mate Winterbottom and Whincup during the middle stint.

Starting from fifth on the grid, Whincup had passed both Van Gisbergen and Winterbottom in the early laps before giving the positions back when he locked his rear brakes and rotated at the hairpin.

The Orrcon Falcon driver subsequently dropped position to the eventual winner, Davison, Van Gisbergen and Slade when his engine stalled during his stop.

Winterbottom was unable to recover any positions over the remaining 30 laps to the flag, with a move from Van Gisbergen on Davison the only significant late development.

Davison now leads the championship by a reduced 18 point margin over Whincup after four races, with Winterbottom a further six points adrift in third.

It was a difficult day for fellow title challenger Garth Tander, who finished 22nd after a series of incidents. The first occurred on the eighth lap on the race when the Holden Racing Team Commodore made contact with David Reynolds at Turn 6.

While Reynolds lost several laps fixing damage sustained to The Bottle-O Falcon, a top 10 still seemed possible for Tander before a midrace touch with Rick Kelly at Turn 4 caused another unscheduled pittstop.

All drivers chose to run a hard-soft-soft tyre strategy except Russell Ingall, who started from 24th position on the soft tyres.

The decision saw the Supercheap Auto Holden lead the race briefly, but any chance of a result was brough undone by the Lowndes Safety Car.

David Russell joined Lowndes on the retirements list late in the race when his Pepsi Max Crew Commodore developed an oil leak. The Dunlop Series driver had gone a lap down early in the race thanks to a slow first pitstop. Team-mate Karl Reindler fared little better in 24th after requiring a battery change.

See below for the championship standings after four races