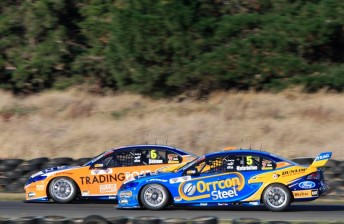 Mark Winterbottom and Will Davison swap the lead midrace

The Orrcon Steel Falcon driver led eventual winner Jamie Whincup prior to losing nine seconds and four places in the final round of stops.

The FPR engines in the cars of Will Davison and Tony D’Alberto also cut out during their final pitstops – costing the latter seven positions.

Having finished second to Davison in Saturday’s race due to a poor start, Winterbottom described today’s fifth placed finish as another missed opportunity.

“The protocol is we spin the wheels, the car drops and we take off, which stops any lag time of clutch pick-up ” explained Winterbottom of the pitstops.

“But it stalled, and when it stalled it engaged the anti-stall mechanism which put the starter motor into a free spin. I sat there for quite a while trying to start the car.

“That was majorly disappointing, because that was definitely going to be a win.

“We had a good car, good track position, and as soon as you get stuck behind someone you lose brakes. That was the story of the race, I lost 9s in the pits.

Team principal Tim Edwards confirmed that the pitstop issue will be reviewed thoroughly.

“Obviously the stall in the pitstop determined who won the race,” said Edwards.

“We would have come out comfortably in front of Jamie without that, so we’ll have to look at why it did it and make sure it doesn’t happen again.”

While Davison managed to refire his engine without losing time, the one-time race leader struggled for pace during the two soft tyre stints on his way to an eventual third place.

Davison had a fraught day that began with a high-speed off in practice. The Tradingpost Falcon then made minor contact with Whincup when the reigning champion spun at Turn 4 in the first stint of the race, before inadvertently knocking Craig Lowndes out of contention at the same corner several laps later.

“I’ve got to be happy (with the result), but I’m a bit disappointed because we weren’t as competitive as yesterday,” reflected Davison.

“I sort of felt that all day strangely, even in practice. In qualifying I was able to jag one lap, but it was a little bit of a struggle.”

Davison now leads the championship by a reduced 18 point margin over Whincup after four races, with Winterbottom a further six points adrift in third.