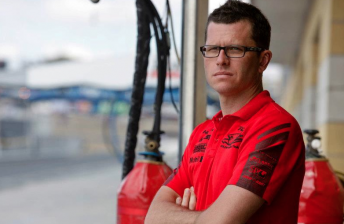 Garth Tander will miss today’s fourth race of the 2012 V8 Supercars Championship at Symmons Plains after being struck down by food poisoning.

Tander finished seventh in the opening leg of the Tasmania Challenge yesterday before attending a team dinner in honour of his 35th birthday.

The Holden Racing Team has confirmed that the former West Australian will be replaced by wife Leanne Tander for today’s 200km race.

Leanne has not raced a V8 Supercar since the 2009 Bathurst 1000, but recently announced a return to racing after giving birth to the couple’s first child last year.

It is understood that Leanne had brought her helmet to the Symmons Plains circuit while negotiating an ultimately unsuccessful bid to make a one-off appearance in the Auto One V8 Ute class.

Formerly a full-time driver in the V8 Supercars Development Series, Leanne is confident that her knowledge of the Tasmanian circuit will help her put in a competitive performance among the competitive V8 Supercars field.

“I’ve been here a few times with the Touring Car Masters and Formula 3, so I’ve raced at Symmons Plains quite a bit before with a bit of success,” said Tander.

“With the format change this year, you get a 20 minute practice session before qualifying, so it does give me that time to learn the track in the new car.

“I think it’s going to be tough but I’m really looking forward to it.”

The HRT’s decision to substitute Garth for wife Leanne is not without precedent. Paddy McKeown drove husband Jim McKeown’s Lotus Cortina in the third round of the 1969 Australian Touring Car Championship at Mallala after the touring car stalwart fell ill on race morning.

Tander will drive the Holden Racing Team Commodore in practice at 1005 today before qualifying at 1300.

See below for Speedcafe.com’s video interview with Leanne Tander