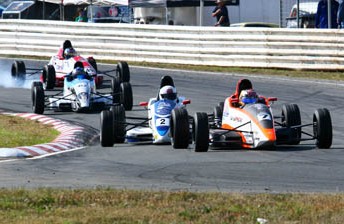 Davies win added to a weekend of firsts, with Garry Jacobson taking his first race win of his career yesterday, and also taking his first overall round win, thanks to another race victory in Race 2 this morning.

Race 2 featured an incredible three-way battle for position between Jacobson, Davies and Matthew Hart, with the trio continually swapping positions. Jacobson eventually got the better of Hart and Davies.

The race saw a horrifying close call when Macauley Jones stalled at the start and could not get his CAMS Rising Stars Mygale moving. Jones jumped out of the car and the officials brought out the Safety Car, but the field, still at race pace, had to take avoiding action around the stranded machine.

The third race saw Jacobson slip off the road on the opening lap, leaving Davies and Hart to fight for the win.

Davies lost third gear in the closing stages of the race but managed to hold off Hart, despite persistent pressure. Liam Sager finished third.

Jacobsen, in the meantime, fought his way from the tail of the field to fifth, securing him the round win and the championship lead.

“I was a bit disappointed with myself going off at the start of the third race,” Jacobson said.

“However, I managed to get it going and back through for the round win. The car was three-quarters of a second quicker than the field, it was flying.

“I’m really happy with the result. The positive to come out of the weekend is definitely the speed of the car.”

The result for Davies was a breakthrough at the national level, and the perfect rebound after a trying opening round at Albert Park.

“I lost third gear at the end of the race, that’s why it was a bit messy over the last few laps,” Davies said.

“I’m hugely relieved. It was very close at the finish, as third gear totally let go at the final corner of the race.

“It’s awesome to get my first race win, hopefully we can keep it going, I think we have the speed to be a force.”

Fourth for the round was Jack Le Brocq, who shadowed the leaders all weekend long.

The biggest incident of the round involved Simon Hodge and Sam Power, with Hodge emerging unhurt after taking a wild ride into the pit entry wall.

The Australian Formula Ford Championship continues at Phillip Island on May 18-20.