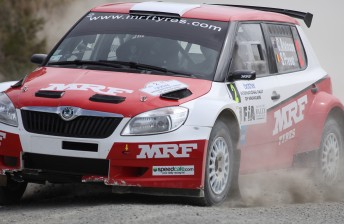 Australia’s Chris Atkinson has won the opening round of the FIA Asia Pacific Rally Championship in New Zealand today.

Atkinson and co-driver Stephane Prevot held on to their solid overnight lead to win the International Rally of Whanagrei by 28.1s to lead the APRC championship over fellow world championship compatriot PG Andersson.

“This has been a great start to the championship and an awesome effort by the MRF Skoda team considering this is a new venture for all of us driving and running the Fabia S2000.” Atkinson told speedcafe.com.

“We couldn’t quite take maximum points from today as it was hard going running first on the road which lost us some time sweeping the loose gravel off the hard surface.”

“There’s no better way to start a championship than with a win and we’ll be looking to roll this form into round two in New Caledonia in a few weeks time.”

Swede Andersson proved to be the only challenger to the Aussie behind the wheel of his Proton Satria S2000. The former Suzuki World Rally Team driver finished fastest over the Leg 2 stages and has set the scene for what is going to be a tight-fought APRC battle in 2012.

The second MRF Skoda of Indian Gaurav Gill secured the final podium spot edging out the more experienced Alistair McRae who struggled to keep up with the pace of the two Skodas in his Proton Satria S2000.

Rounding out the top-5 was Kiwi Brian Green. Not to let age get in the way of a good result the 65-year-old drove a faultless event to round out a successful start to his 2012 APRC campaign.

Round two of the APRC takes crews to the French colonised pacific island of New Caledonia for Rallye de Nouvelle Caledonia – April 28-29.