Stewards to crack down on qualifying conduct

Stewards to crack down on qualifying conduct 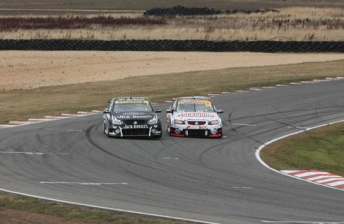 V8 Supercars stewards are set to take a harder stance on drivers not abiding by driver conduct rules during qualifying.

The move, ratified by the V8 Supercars Commission at Symmons Plains, has been made to reduce the potential for accidents, like the huge qualifying crash that unfolded between Jonathon Webb and Greg Murphy at the Clipsal 500 earlier this month.

V8 Supercars has elected not to change any rule, instead taking a tougher line on the pre-existing code of conduct rule that states: “It is not permitted to drive unnecessarily slowly, erratically or which is deemed to be potential dangerous to other dangerous at anytime.”

All V8 Supercars drivers and team managers were reminded of the rule in last night’s driver’s briefing.

According to V8 Supercars’ operations manager Damien White, if drivers are seen to be impeding others on the track, penalties will be handed out more freely than has been seen in the past.

“There is a rule in place, and we will take the view that if they drive unnecessarily slowly and cause a problem for another car, then the stewards will look at it closely and think about the penalty,” White told Speedcafe.com.

“The drivers were also reminded that the ‘minimum recommended’ penalty is exclusion from the session.”

Webb, who watched Race 2 of the Clipsal 500 from the sidelines after his qualifying crash, says that the Commission’s decision does not go far enough.

“If they enforce the rule by handing out penalties, then people will start to listen to it and start to pay attention,” Webb told Speedcafe.com.

“But until someone gets kicked in the butt and penalised, nothing is going to change, and we’re probably going to end up with more damaged cars.

“The problem is what else do you do? What rules do you put in place? I didn’t expect them to come up with a rocket science idea, but I’m a little disappointed that something couldn’t be done.

“From my point of view, considering the heartache my team has seen over the past couple of weeks, it would have been nice to see something else added to it.”

The 2.41km Symmons Plains layout is regarded as one of the most difficult at which to find a clear lap in qualifying, with several near-misses having been recorded in recent years.