LDM and Taz fighting for a Tassie icon

LDM and Taz fighting for a Tassie icon 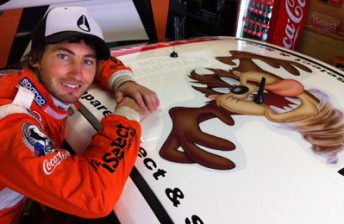 Taz Douglas and Looney Toons' character share the same name, and both are being used to show the support for the endangered Tasmanian devil

Lucas Dumbrell Motorsport and its driver Taz Douglas are offering support to an endangered Tasmanian icon at Symmons Plains this weekend.

The V8 Supercars team is competing with ‘Save the Tasmanian Devil Program’ logos on the B-pillar of its Holden Commodore VE, and also running a large Tassie Devil on the roof of the #30 entry.

A highly contagious facial tumour disease has been developing in the Tasmanian devils since the late 1990s, drastically reducing the carnivorous marsupial’s population in their native state. The devils have been on the endangered animal list since 2008.

Government programs, including the ‘Save the Tasmanian Devil Program’ have been established to reduce the impact of the disease.

Driver Douglas visited some Tasmanian devils earlier in the week in Launceston, and V8 team owner Lucas Dumbrell says that the link between his driver Taz and the Tassie Devil was too good an opportunity to pass up.

“The Tasmanian devil is going through a tough time with the facial cancer that the majority of its population is developing,” Dumbrell told Speedcafe.com.

“It’s a serious issue, so we thought we’d try something different, and coincidently, our driver’s name is Taz, so it was the right fit.

“It’s just a gesture from us to drum up some support and hopefully this gets some attention and raises awareness in the V8 Supercars paddock and beyond.”