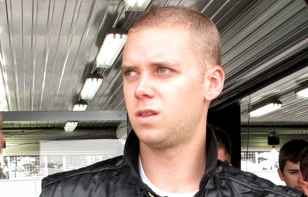 Jonathon Webb has topped the fourth practice session of the weekend at Symmons Plains ahead of qualifying this afternoon.

The Tekno Autosports driver completed a succession of fast laps within the final five minutes of the 30 minute session, ending with a best of 51.30s.

Less than 0.6s separated the top 23 runners at the conclusion of the session.

Mark Winterbottom brought out the only red flag of the weekend so far when he beached his Orrcon Steel FPR Falcon in the Turn 4 gravel trap at the 15 minute mark.

Winterbottom rejoined the circuit soon after the restart, and ended the session 11th fastest.

Tim Slade had been lucky to escape an early mistake at Turn 6 that saw the Lucky 7 Falcon spin backwards through the gravel trap.

Jamie Whincup also ventured off the road at Turn 6 in the opening minutes but joined Slade in escaping without damage.