Hirvonen keeps his head in Portugal

Hirvonen keeps his head in Portugal 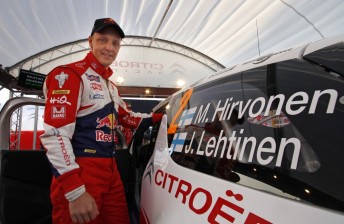 Mikko Hirvonen out in front in Portugal

Citroen new boy Mikko Hirvonen is in the box seat after both Ford factory drivers Jari-Matti and Petter Solberg went off the road in muddy conditions in the second leg at the Rally de Portugal.

Neither Ford Fiesta RS World Rally Car was badly damaged and both will restart tomorrow under Rally 2 regulations, with a time penalty imposed for the special stages missed. Latvala will incur a 15 minute penalty after crashing out on the opening test, while Solberg will inherit a 10 minute penalty after retiring a stage later.

The one lucky break for the team came with the cancellation of the afternoon’s three stages for safety reasons. It meant an additional 15 minute penalty for each driver for missing the three tests was scrapped.

After Sébastien Loeb’s retirement from the event in a big crash on the opening night, Ford was in the box seat holding down the top two positions in the rally. Despite the conditions, it was a less than impressed Ford team boss Malcolm Wilson.

“After Sébastien Loeb’s retirement, we had an opportunity to close on our championship rivals, but we squandered an incredible lifeline,” said Wilson.

“Conditions were treacherous but both drivers have a lot of experience. We didn’t need the pace, we needed to be smart and clever but we were caught out.

“Today was a huge disappointment but I’ve been in this sport long enough to know we can fight back. Our real team spirit will kick in,” added Wilson.

“It was very, very foggy and very, very muddy as well, and you cannot even believe how slowly we are driving – but it’s so slippy that if there’s one corner you don’t get right, it’s over,” said Hirvonen. 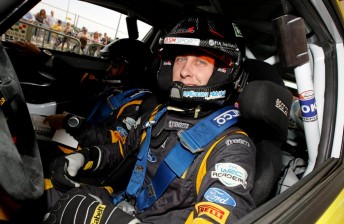 Australia’s Brendan Reeves has kept his eye on the ball to be second in the WRC Academy to British driver Alastair Fisher. The Victorian is 59-seconds off the lead and 24-seconds ahead of third placed Pontus Tidemand of Sweden.

“The stages were tremendously slippery and the fog was crazy,” said Reeves.

“The grip was really inconsistent so it was difficult to know when to push. I made the car a lot softer for the second stage [SS6] to try and get some more grip but we had a spin and lost some time.

“We are still in second but Pontus is not too far behind, so we want to try and keep our position tomorrow. There is still another day and a lot can happen, second would be good but first would be awesome, we will see what happens.”

Hard luck for New Zealand’s Hayden Padden who started the day with a healthy lead in the Super 2000 (SWRC) category, but an electrical fault just 1.5 kilometres in the first stage sidelined Paddon’s Skoda. Like the Ford factory team, the Kiwi will restart the rally for day three.

“We don’t know the exact cause yet, but we will get the car fixed to rejoin tomorrow under Rally 2 rules and therefore get valuable championship points,” said Paddon.

The third leg covers familiar territory north of Faro and is the longest of the rally with 148.16km of competition. Drivers are scheduled to tackle two identical loops of three stages, split by a return to the service park at the Algarve Stadium.