Evans out front in Forest Rally

Evans out front in Forest Rally 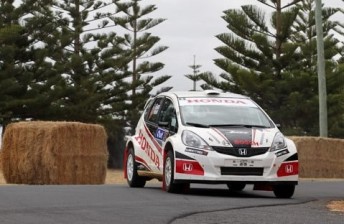 Eli Evans in a Honda Jazz is proving that experience means everything on the roads of Nannup in Western Australia today, extending their lead in the Bosch ARC Two-Wheel-Drive Championship to 1:23.7 after the sixth stage of the Quit Forest Rally.

Evans, who moved to a two-wheel-drive Honda three years ago has been steadily extending his lead across each of the forest stages but has also benefited from the misfortune of fellow Honda factory driver Mark Pedder who got bogged on SS4 this morning and has been unable to get his car out of the stage at this time.

Jack Monkhouse (Nissan Sylvia S15), who has returned to the Bosch ARC in 2012, is currently sitting in second with seventeen-year-old West Australian Dylan King (Ford Escort) in third.

“The times we’re doing out there are obviously really pleasing, but coming in I knew this car would really work well in the forest and it’s proving straight away that the G2 Jazz is built for this sort of competition,” said Evans.

“Coming into the rally we were hopeful that we would be in this position, or close to it, at this stage of the event, but there were a lot of unknowns for us with the car, and what the tyre wear would be like so it’s great to be still holding an advantage going into the final four stages,” said Box.

Neal Bates is enjoying his return to the Quit Forest Rally, contesting the Classic Rally Challenge in a Toyota Celica RA40. The Canberran has a 28.4-second lead over Jeffrey David (Porsche 911) at the end of SS6 and would be sitting in third outright if they were contesting the ARC two-wheel-drive competition.

The first riders are through the opening stage of the Quit Forest Rally Moto event and it is Ben Grabham leading his brother Damien Grabham by only 4.3 seconds. Warren Strange is 42 seconds behind in third.

Four more stages are to be run this afternoon.