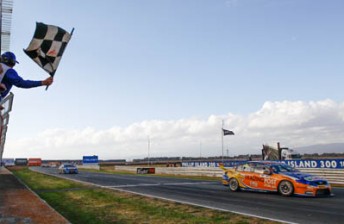 The FPR Falcons raced nose-to-tail for the majority of the 59 laps, with Davison having taken the lead from his pole-sitting team-mate off the start.

The pair were a full 8.5s clear of third-placed Jamie Whincup at the chequered flag.

The entire field, bar Dean Fiore and David Wall, started the race on the hard tyres.

Davison’s cause was helped early by a battle for second breaking out between Winterbottom and Whincup. The TeamVodafone Commodore made it passed the Orrcon Falcon on the opening after a rub between the pair on the back straight. 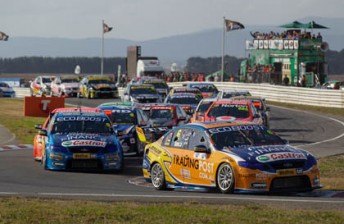 Davison leads the field at the start

Winterbottom reversed the positions immediately prior to triggering the pistop cycle on Lap 23.

Davison pitted one lap later and, despite a minor delay on the left-rear corner of the Tradingpost entry, rejoined in the effective race lead.

Winterbottom was never more than a second adrift of his team-mate over the remaining laps, but could not find a way by.

Whincup and Van Gisbergen held third and fourth to the flag, while Lowndes found himself having to pass Reynolds twice during the race after being jumped by The Bottle-O Falcon in the pitstops.

Slade could count himself lucky to finish eighth after escaping from a wild ride through the Turn 1/2 sandtrap while battling with Todd Kelly in the opening laps.

Taz Douglas ran in the top 10 for the majority of the day but lost position to Lee Holdsworth, Todd Kelly and Steven Johnson in the final laps to end the race 12th.

James Courtney and Rick Kelly were 18th and 19th respectively after the pair of Holdens spun at Turn 6 on Lap 1.

Tony D’Alberto was the last of the classified runners in 26th after losing time with steering issues caused by early contact with Alex Premat. The Frenchman had fallen down the field after stalling at the start.

It was a difficult day for this morning’s practice pace-setter Jonathon Webb, who speared off three times at the Turn 4 hairpin during the opening laps before retiring with brake problems.

Webb was joined on the retirements list by David Wall. The Brad Jones Racing Commodore was running at the chequered flag, but had lost significant laps in the pits with a power steering problem.

See below for the championship standings after Race 3