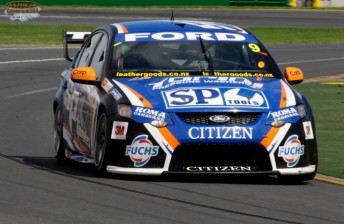 The Kiwi ran on hard tyres for the majority of the two 20 minute sessions before bolting on a set of used softs in the final minutes of the day.

Van Gisbergen subsequently jumped to the top of the times – toppling Ford Performance Racing trio Will Davison, David Reynolds and Will Davison in the dying moments.

While admitting that race pace could yield a different story, Van Gisbergen says that his car felt better than it did when the series last visited Tasmania less than five months ago.

“Last year we were up the front here in practice and qualifying as well but just didn’t have the race pace,” said Van Gisbergen after Practice 3.

“The car is fairly similar to last year but we need to improve the race pace, so we’ve got a few ideas and hopefully if we qualify well we can improve the car in the races and run up front.

“The stuff we worked on at the Grand Prix, mainly braking, really helped here, and the car’s a lot better than it was when we were here last year.

“It’s a good start to the weekend but it’s only Friday. The FPR cars look quite quick, all of them are up there, but it’s a pretty good start.”

Today saw the first running of a new practice format that is set to feature at several events this year.

“It was quite tight today only having the two 20 minute sessions, it’s a pretty interesting format,” said Van Gisbergen.

“You can’t sit down in-depth and look at the data, you just have to jump out and have a quick look and away you go again.

“You can’t sit down with your engineer and de-brief about what changes did what, and there’s not too much time to make changes as well. You’ve got to be onto it, and your changes have got to be pretty accurate.”

As part of the new format, additional 30 minute practice sessions have been added to the Saturday and Sunday morning schedules.

Practice 4 is scheduled to commence at 1010 local time tomorrow.