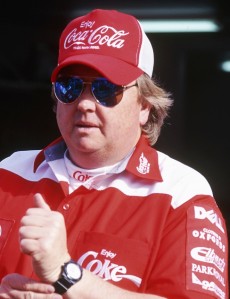 Phil Harrison is an interesting story; most know him as the Marketing Manager at Sydney’s Eastern Creek Raceway, but he has also worked with Wayne Gardner’s Coca-Cola and Possum Bourne’s Subaru Rally teams, he was involved in Channel 7’s motor sport broadcast, he promoted Supercross in Australia and even dabbled in some racing – something he admits to being not very good at.

This is a man that has been involved in some sort of motor sport since the mid-1950s; he’s carved out a successful career and can say that the sport is in a better place for his involvement.

That last statement is a big one, because it’s hard to quantify what this actually means. You can say he left an imprint on V8 Supercars thanks to his PR role with Gardner’s team and you can say that the fans were the winner thanks to his behind the scenes roles with 7’s motor sport broadcast.

Where Harrison made his biggest mark was through Supercross. Indoor Supercross was introduced to Australia by Phil Harrison. He, along with Phil Christensen and Allan Horsley, brought in dirt and jumps to entertainment centres across Australia in the early 1980s, paving the way to the events that we see today.

Harrison was also responsible for the creation of Muscle Car Masters, an event that attracts thousands of fans still interested in the cars and drivers of yesteryear. Add to that his role in turning Eastern Creek into one of Australia’s busiest race tracks and you can see how he has left an indelible mark on Australian motor sport.

Harrison has been going to race events since he was five; he still has the photo of him on the family rug watching the racing at Mt Druitt. He laughs when he explains that 55 odd years later he is working at Eastern Creek – “I could have crawled between those two places, they are that close,” he told Speedcafe.com.

Like most that had an interest in racing he competed himself. In his Morris Cooper S he was a regular hill-climber, he then proceeded to race his Clubman and a borrowed Formula Ford at Warwick Farm, Amaroo and Oran Park.

Admitting that as a racer he made a brilliant sports administrator, he decided to stop racing to concentrate on a career. 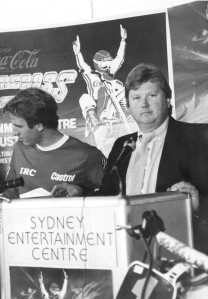 His professional motor sport career started in the early 80s, when he got a job at the Australian Racing Drivers’ Club (ARDC) as support to Ivan Stibbard.

“I‘d do anything that Ivan Stibbard didn’t want to do,” said Harrison.

“Ivan was good with logistics and everything was in order, everything had a plan, it was an excellent learning curve.

“I learned the rules and what to do; it was a matter of watching him and completing my little projects. It was a good grounding in how you ran an event, the fact that it was motor sport was irrelevant.

“Working alongside Ivan and learning what I learned gave me a lot of confidence in running events.”

It was this confidence that saw him leave the ARDC and start his own promoter venture. He along with Christensen and Horsley came up with an idea to stage Supercross events indoors.

“I used to talk about taking Supercross to the (Sydney) Entertainment Centre,” said Harrison.

“I’d talk about bringing dirt in and racing motor bikes and we laughed about it, one day I was talking about it the next I was meeting them with a proposal.

“I thought they’d throw us out of the office, but management listened, they didn’t say much but they said they’d contact us the following Tuesday.

“Sure enough they called as back and the first thing they said was ‘why didn’t you come to us sooner?’.

“Our first event was very successful, we sold out two nights and half a matinee on the Sunday then went to Brisbane and Melbourne.

“We also staged events at showgrounds and Speedways, after that I sold my share and started doing them myself.”

It was that first Supercross event that introduced him to a young Neil Crompton and paved the way towards a job in V8 Supercars.

“The first Supercross race we ran in Melbourne, there was a young bloke that came down to help with the commentary,” said Harrison.

“He drove down and we gave him $50 petrol money and that was Neil Crompton – who hasn’t been able to shake me since.

“He moved to the city and we did various things together, that’s how the (Wayne) Gardner gig came about.

“The Coca-Cola team needed help with their PR and Marketing.

“I’d met team manager Alan Heaphy , Neil and Wayne, we all got along well and it went from there.”

Harrison loved working for the Coca-Cola team and with Wayne Gardner.

“It was fantastic, it was really interesting,” said Harrison.

“Alan had international experience, Wally Storey was the engineer, I knew Neil well and there was Wayne, who was the star dust.

“I terms of Wayne it was interesting being that close to a genuine champion.

“He was probably the best known athlete in Australia at the time. What he achieved was not because of luck, he was so driven, dedicated and focussed.

“It was a really good experience.” 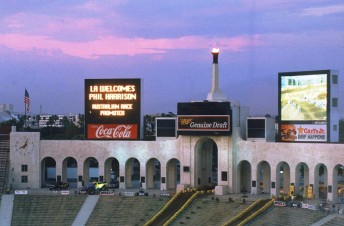 Harrison went to America to learn about Supercross events

This took him to several tracks and with his racing and promoter background, there wasn’t a race track in Australia that he hadn’t been too.

Having this thorough understanding of Australian motor sport helped when in 2002 he returned to the ARDC as its Marketing Manager.

“By then the ARDC had sold Amaroo Park, it was no longer involved in Bathurst and it didn’t exactly have traffic jams of people wanting to use Eastern Creek as a venue,” said Harrison.

“We had to get some money in the till so we had to come up with some ideas for track usage, particularly mid-week.

“We have an excellent team at Eastern Creek, so we created our own driver training school and our own motorcycle ride days and started doing track days.

“I’d been to every race track in Australia, doing corporate days and jobs for car companies, but the tracks back then weren’t very use friendly, fortunately things have since changed for the better.”

With this in mind, Harrison and the ARDC set out to turn Eastern Creek into Australia’s number one driving facility.

“People weren’t using race tracks as much as they wanted to or could, they just weren’t getting the service,” said Harrison.

“We focussed on the obvious stuff and kept it simple, but we prided ourselves on our track preparation, giving the best customer service, the best catering and ensuring everything was neat and tidy.

“We must be doing something right, the track and its facilities now enjoy good bookings”

One of the other things that Harrison has been involved in, through Eastern Creek, was the creation of Muscle Car Masters – now one of the biggest annual motor sport events on the national calendar.

“We knew what people wanted and what they were in to. I always thought that when I went to a historic event the tin tops were the poor relation but the most entertaining.

“Drivers like Peter Brock and Allan Moffat always had the longest autograph queues.

“The old production cars would lock up their brakes and slide sideways, they had the ‘Oh Shit factor’

“We wanted people to see, hear and touch these old cars and watch them race and meet as many of the old time drivers as possible.

“It’s worked, this year will be the eighth event and it continues to get bigger and bigger.”

With the growth and success of Eastern Creek Raceway, Harrison has some fond memories, with one V8 race in 2003 top of mind.

“The biggest news days would have been the first two 500cc events,” said Harrison.

“But in recent times the Skaife-Ingall incident stands out.

“It was crazy and you won’t see it again, it was country Speedway stuff.

“Skaife is such a fearsome competitor and they don’t call Ingall ‘The Enforcer’ for nothing.

“I was surprised that V8 Supercars didn’t use it more, I would have had it in all my TV commercials.” 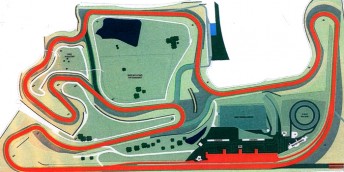 It’s been a while since V8s have raced at Eastern Creek. With V8s moving to the street circuit at Homebush many believe the series won’t return to ‘The Creek’, but you never know.

“The return of V8 racing to Eastern Creek is not for me to comment on, that’s for the board of directors,” said Harrison.

“Eastern Creek is a very busy track and we’ve purposely not put all our eggs in one basket.

“All race tracks can get by without V8s but you would rather have them than not have them, these days most V8 teams use Eastern Creek for their corporate days.”

And what’s next for Eastern Creek? The track is currently going through some significant upgrades. The track has been extended and split so that it can run as a single circuit or as two separate tracks.

“We’ll have a separate track around what has been traditionally called corporate hill with an extension going up into part of the spectator area,” said Harrison.

“For us it means we can run two separate activities at the onetime which will ease some of the pressure during the week, where people want to book the venue but not necessarily the whole track.

“This will be followed up by some general sprucing up and upgrades to the venue, which hasn’t been touched for some 20 years.”

One of Eastern Creek’s most famous days. 2003 and the Skaife v Ingall incident